The Cordyceps Mushroom: Protector and Healer of the Respiratory System

We are living in a world that is hostile to our lungs. Toxic particles in the air, coming from industry, agriculture, and cars, are a leading cause of many chronic respiratory illnesses and cancers. Combined with the new pandemic virus, COVID-19, the human respiratory system is in trouble. In our collective work to defeat COVID-19 and to combat air pollution and create a cleaner, healthier earth, our respiratory systems need all the support they can get. Nature provides us with many medicinal mushrooms and plants that are healing to the lungs. One particular family of mushrooms, the cordyceps, are superstars in this regard.

Cordyceps /ˈkɔːrdɪsɛps/ is a genus of ascomycete fungi (sac fungi) that includes about 400 species. Cordyceps mushrooms have been used in traditional medicine for centuries. Wild cordyceps fungi grow from the bodies of wild caterpillars, but today, we can grow these little mushrooms on farmed caterpillars and organic rice. Cordyceps are traditionally used to soothe the lungs, replenish the kidneys, to reduce fatigue, and to boost the sex drive. Years of scientific research on these mushrooms supports traditional uses and has also discovered a plethora of other medicinal properties. Among other findings, research has revealed that cordyceps can successfully treat various cancers, and that the mushrooms are supportive of heart and kidney health. But the many different ways in which cordyceps mushrooms are beneficial to the respiratory system is especially fascinating. 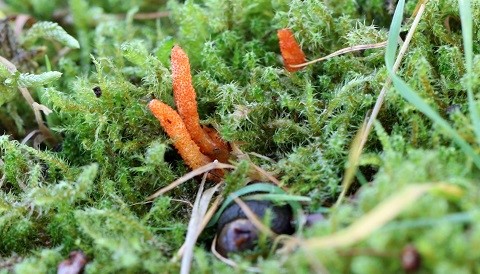 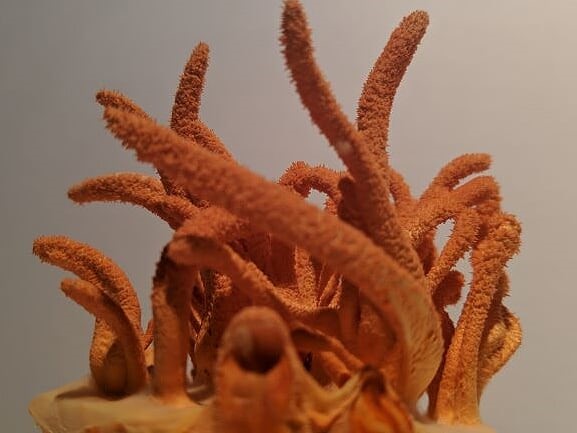 Above all, research had demonstrated that cordyceps are beneficial for those who suffer from chronic obstructive pulmonary disease (CODP) and from asthma. The anti-inflammatory properties of cordyceps are a driving force behind the little mushrooms’ medicinal powers. This ability to reduce inflammation in the airways has been demonstrated in several studies, making cordyceps useful for those who suffer from allergies and for asthmatics (Lin et al, 2001; Gao, Li & Shen, 2009; Wang et al, 2012 and Chiou & Lin, 2015). Cordyceps extract has even been found to reduce undesirable immune responses and cytokine expression in asthmatics (Heo et al., 2010). One particularly interesting study included 120 randomized human test subjects and discovered that the use of cordyceps both improved lung function and the inflammatory profile of patients with moderate-to-severe asthma (Wang et al., 2016).

Other research has revealed that consumption of cordyceps can inhibit tracheal contractions and relax the bronchial walls (Yang et al., 2018). Much of the reason behind the mushrooms’ healing abilities is due to their anti-inflammatory properties, but they affect the airway in many other ways. Studies have revealed that use of cordyceps may increase airflow to the lungs and enhance oxygen utilization, and that cordyceps extract can even be used as a therapeutic reagent in the treatment of hypoxic pulmonary hypertension (Gao et al, 2010). Cordyceps extract has also been found to be able to inhibit cellular senescence induced by cigarette smoke (Liu et al., 2016), and can even alleviate acute lung injury that may be a side effect of the use of certain chemotherapies (Lie et al, 2015).

A review of twenty studies thus demonstrates that these powerful little mushrooms may be an effective all-around treatment for many respiratory issues. Cordyceps extract supports breathing, enhances oxygen utilization, reduces inflammation, and directly inhibits tumor formation and cellular damage in the respiratory system caused by bacterial infections, viral infections, chemicals and air pollution. Those with chronic respiratory issues – as well as those who are currently fighting respiratory infection – would be wise to give the little cordyceps mushroom a chance.

Hsu, Chia-Hsiu. (2008). "Effects of the Immunomodulatory Agent Cordyceps militaris on

Airway Inflammation in a Mouse Asthma Model" in Pediatrics & Neonatology, 49(5):

traditional Chinese medicine" in Journal of Pharmaceutical and Biomedical Analysis,

Liu, A. et al. (2016). "The inhibitory mechanism of Cordyceps sinensis on cigarette smoke

Through miRNAs-Mediated CXCR2 Inhibition" in Cellular Physiology and Biochemistry,

Polysaccharide on the OVA-induced Airway Inflammation and Hyperresponsiveness in a

COPD of GOLD Stages 2–3: Systematic Review and Meta-Analysis" in Evidence-Based

Chinese herbal regimen: Cordyceps sinensis: part I" in The Journal of Alternative and

Chinese herbal regimen: Cordyceps sinensis: part II" in The Journal of Alternative and

The Healing Powers of the Chaga Mushroom